Belitung, formerly Billiton,  is an island on the east coast of Sumatra, Indonesia in the Java Sea. The island is known for its pepper, kaolin clay and tin mineral. It was in the possession of the British from 1812 until the British ceded control of the island to the Dutch in the Anglo-Dutch Treaty of 1824. Its main town is Tanjung Pandan.

The mainly tourist destinations are beaches and offshore islands/islets. The beaches are Tanjung Tinggi Beach and Tanjung Kelayang Beach which both have blue clear water, sand and rocky beaches. The islands/islets are Batu Berlayar Island which full of granite, Pasir Island which is made of sand (Pasir means Sand in Indonesian language) and submerged during high tide, Bird Islet (Pulau Burung, which can be accessed from Tanjung Binga beach by walking on at low tide), Lengkuas Island (which is the home of a 129-year-old lighthouse and a good place for snorkeling), Babi Island and Kelayang Islet.

You might not expect it from the island whose tin mines gave their name to Australian mining giant BHP Billiton, but Belitung is among the most beautiful islands in Southeast Asia. Pristine white sand beaches look out on a turquoise sea filled with great snorkelling and a fantastic display of off shore islands. Check out Tanjung Kelayang and Tanjung Tinggi for world class beaches without the hustle and bustle now found at beaches of this calibre elsewhere. Small uninhabited off shore islands range from white sand fringed coconut plantations to elaborate granite rock formations to long temporary sand bars of sand the quality of powdered sugar. Some are too far to swim to from the shore, but colourful local fishing boats will take you on an island tour.

As yet uncharted by the Lonely Planet guide of 2012, no big resorts have been built here yet but it will not remain a sleepy paradise for long. The widely-translated novels Laskar Pelangi (“Rainbow Troops”) published in 2005 and its sequel “The Dreamer” have done a lot to put Belitung on the map of international tourism.

The best time to visit:

Dry season (April – October) is obviously sunnier but can be very windy, resulting in choppy waters. During the rainy season (November – March) there is less wind though it does rain most afternoons. The school holidays (June-July) are best avoided as a lot of local tourists come from elsewhere in Indonesia. Similarly weekends can be quite busy with large Indonesian tour groups visiting from Jakarta. Interesting annual cultural festivals include:

How to go to Belitung Island:

Besides the obvious beach activities, like swimming in the crystal clear seas and laying around on the white sand beaches, Belitung has plenty more to offer. Snorkelling is great. The coral right offshore in many places is still in fantastic shape. Many hotels also have scuba diving equipment for hire. The coast off North-East Belitung is renowned for its numerous Chinese wrecks from different dynasties. One of the oldest wrecks in Indonesian waters was recently discovered offshore. Beachcombing and long beach walks discovering hidden coves and secret beaches are another healthy activity. Some noteworthy beaches are listed below:

is another fun activity. Belitung has many smaller uninhabited islands surrounding it with stunning beaches. Other islands look like abstract sculptures consisting entirely of granite rock. Local fishing boats can take you out for a fair fee (400,000-500,000 per day including food). Higly recomended to bring your own food from mainland. You may want to check the tides before heading out. Some noteworthy examples of islands (“pulau” in Bahasa) to visit are:

Downtown Tanjung Pandan is quite interesting due to the many Dutch Colonial buildings and shops. Most of the governmental buildings are the original Dutch buildings and the old Dutch tin mining housing compound is still kept up. Traditional Bugis fishing vessels make the wharf and fish market an interesting place to visit. You can also visit the old ceramics pit opened in 1851, the Tanjung Pandan Museum where you can see old ceramics found in shipwrecks, and an old Dutch fort. 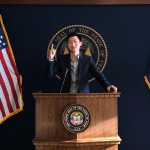